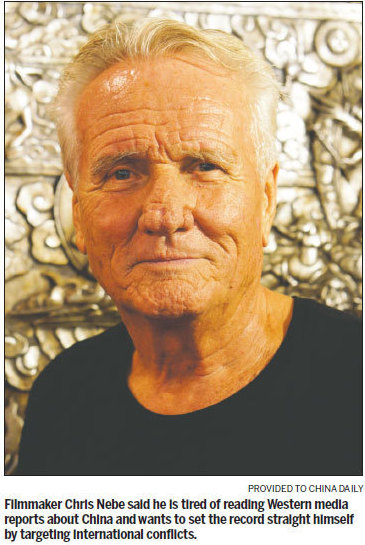 Each year, Global Film Awards, along with each of their sister competitions:  The Accolade
Global Film Competition, The Best Shorts Competition and The IndieFEST Film Awards, reviews films nominated by their judges during the year.  They then honor filmmakers who  bring awareness to issues of Ecological, Political, Social Justice, Health and Wellness, Animals, Wildlife, Conservation and Spiritual importance through their annual Humanitarian Awards.

Monarex Hollywood Corporation was among the illustrious 2015 Humanitarian Award Winners committed to making a difference in the world, specifically for their documentary feature, Unit 731, that explores a side of WWII history largely unknown to the Western World.

Born in the German city of Breslau – which has been Wroclaw, Poland since the end of World War II – Nebe immigrated to the US and learned the film business from an uncle in New York, who used to be an associate of Samuel Goldwyn of Metro-Goldwyn-Mayer (MGM).

After a successful career as a film distributor in Germany, he returned to the US to produce films in Hollywood. After producing a number of feature-length films, he started making documentaries through his connection with China that began at an early age when he lived in the Far East and became fascinated by Eastern cultures.

“There is something about China that few from the West appreciate as I do,” he said. “In its 5,000 years of civilization, China has never fought an aggressive war or taken land from others. In fact, it was always victimized by foreign invasions of imperial colonial powers. There are also amazing philosophers like Lao Tzu and his Tao Te Ching,” he continued. “Their wise words written over 2,000 years ago are still relevant to our world today. Lao Tzu said: ‘Do not tamper with nature’ and ‘Those who are violent will be digging their own tombs’. We have not only harmed nature but also become more and more violent in constant wars.”

Nebe became a social affiliate of the Chinese community in Los Angeles in the mid 1990s and networked with local leaders, later including the USC Institute for Genetic Medicine Art Gallery Advisory Council. Through a vice-president at Yunnan TV, he was invited to make documentaries about Chinese minorities in Yunnan province. Developing from this start, the Mysterious China documentaries brought Monarex several prestigious Telly Awards in the US.

Monarex also was commended on  March, 2016 by the LA County Board of Supervisors: Mike Antonovich, Hilda Solis, Mark Ridley-Thomas, Sheila Kuehl and Don Knabe, for “dedicated service to the affairs of the community and for the civic pride demonstrated by numerous contributions for the benefit of all the citizens of Los Angeles County.  On April 1, 2016, U.S. Congresswoman Grace F. Napolitano recognized Monarex’s efforts to enhance the film industry through providing great opportunities for actors, photographers, producers, directors and writers.

Monarex films have been screened at the USC IGM Art Gallery and across Greater Los Angeles at sites of our partners, to promote the Gallery’s mission to serve as an incubator for social capital and develop mindful stewardship of self, others and the planet.  The IGM Art Gallery Advisory Council congratulates Chris Nebe and Monarex for their contributions to local and global community capacity building.  We thank them for their supportive partnership in our mutual mission.  CLICK to see video of IGM Art Gallery collaboration with Mandarin immersion elementary students, our Young Professionals Committee Chairs and Monarex.